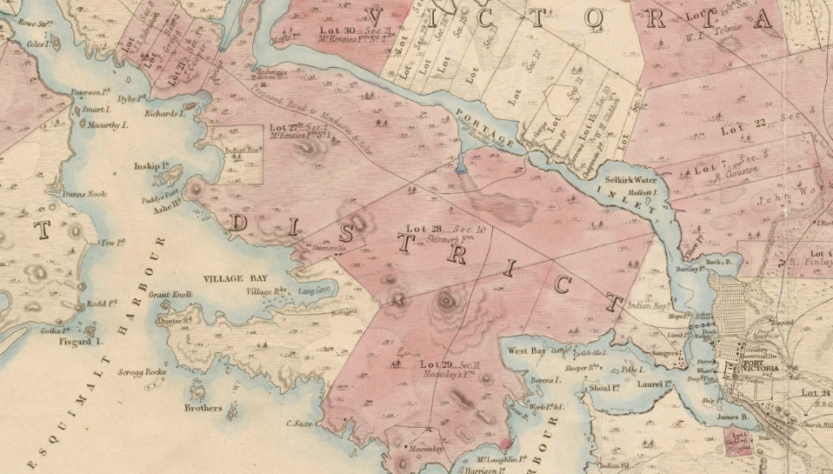 Whilst researching land issues in the provincial Capital Regional District (Victoria, BC) came across an 1854 survey of properties. This is in the traditional lands of several Coast Salish First Nations, including “the Pauquachin, Tseycum, Tsawout and Tsartlip had villages on the Saanich Peninsula; the Scia’new and T’Souke were indigenous to Metchosin and Sooke. The Kosampson (now called Esquimalt Nation) occupied locations along Esquimalt Harbour and Portage Inlet in View Royal. The Lekwungen (now called Songhees) occupied lands in and adjacent to the boundaries of the City of Victoria.” Several reserves are marked on this map. It is delicately tinted with watercolour inks.

This is a detail of the full survey, posted on-line by Capital Regional District government: Map of the Districts and Victoria and Equimalt in Vancouver Island. Published 1854, by John Arrowsmith. 2 inches to 1 mile. The National Archives of the UK (TNA): Public Record Office (PRO). Reference #: CO 700/BritishColumbia2