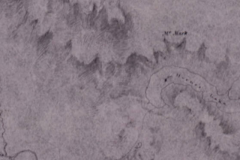 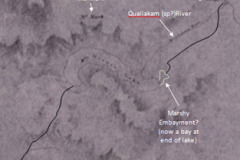 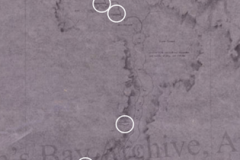 Image #1 depicts the west/northwesterly portion of travel, winding its way from Nanaimo, to Horne Lake, around View Mountain down to the shores of Alberni Canal (archaic, meaning “Channel”), and thence north up the river, before it circles back south-west to the shores of Great Central Lake. Click to the UVic image link (above), to trace the route down the fjord to Barclay Sound, and out into the Pacific before heading south past San Juan Inlet on the way to Fort Victoria. The image at the top of this page depicts the seaward approach to San Juan Inlet – naval officers and public surveyors sketched and reported harbour approach views as an aid to navigation.

Image #2 locates the Qualicum village at the mouth of the Qualicum River, Horne’s Lake, Mount Mark, and a “trail” which is ‘by land and by water’ (route trail traced in black. Note: I have made assumptions made about route tracing where the trail, approaching from the East, meets an area that appears to be marked off as separate from the lake, but not land either. I have termed this a “marshy embayment” as this area is now an open-water bay).

Image #3 shows three or four Tseshaht villages (two north-west of the head of the fjord, and two along the south-west shore).

My research suggests that the original (pre-contact) trail is the Lake and canoes on the Lake.

Horne Lake’s modern stakeholders thought the pre-contact trail went around the lake. And made an agreement with Qualicum First Nation that it has right of access to the trail in perpetuity. But here’s the thing. Different needs make for different modes.

The Coast Salish people traveled by foot through the mountains and there are hints that they stationed canoes at either end long before before fur traders came to trade. HBC voyageurs used tumplines and (I imagine) were reasonably likely to have used the canoes to traverse the lake. They were practical; the best solution for the terrain. I don’t know for certain who used them first. But the local Nations’ people stationed canoes at each end of the lake and continued to use canoes long after HBC moved on.

Not colonial officials and Royal Navy survey parties! They used pack animals (and navy ratings) to carry gear; and were repeatedly surprised to discover canoes hidden in the bush. But preceded to ignore (!) them; instead struggling through the thick, centuries-old undergrowth along the shore.

Even after the footpath became a horse trail and then waggon trail, settlers kept recording their surprise encountering canoes stashed at either end of the lake. British officials preferred a trail. Which became a waggon road, and then logging railway, and then road again.

But the lake is the trail.

Does this discovery mean that the waters of the lake belong to Qualicum First Nation? And the foreshore?

The hunt took 4 years of thinking including ~3 months of research into the start of the backstory. Ruggles  (A Country Most Interesting, 1991) reports on the 1856 survey, but his notes were only found when Jesse Morin PhD, consulting archaeologist to K’omoks FN, told me about Ruggles. Jesse told me about Ruggles during my search for secondary sources, after finding the faint line of the trail on the HBC map myself – which is not catalogued to reference the trail BC Government, local government, and First Nations did not know about either map or the 1856 backstory. You’d need to know localities and the survey history to connect the dots.

I have some of this now – a complex tale of intrigue involving Hudson’s Bay Company (HBC), the slaughter of the Qualicum village on the eastern coast end of the trail by a Haida war party, the Imperial Government and the Colonial Office, the gold rush and the Crown’s legal claim to all gold in its territories, US designs on the Oregon Territory, 1856-72 US/British negotiations to resolve border issues and tensions that later drove events like the Pig War, John Jacob Astor’s Russian American Company and Russian cartographers, tensions related to commercial subterfuge – HBC attempts to deceive the Royal Navy to block settlement (long enough to get control of properties for future sale?), and the Imperial Parliament’s 1857 inquiry into continuance of the HBC Royal Charter awarded in 1650.

All during an era when the 3-6 month duration of travel back to Imperial superiors faced being cut, as the Pacific squadron started to shift from sail to ironclad. The method to communicate with far-distant shores was to send 1 original and several copies {if surveys, called “tracings”} by different ships. Making speedier ‘government communications’ a commercial threat.

Read the brief note in BC Caver — check it out for caving pictures. I suspect the Crown paid for the survey. And if so, is the UK Admiralty and its successors (Ministry of Defence, HM Navigation Office, National Archives) the rightful owner of the 1856 original? Or local First Nations if HBC was trespassing?