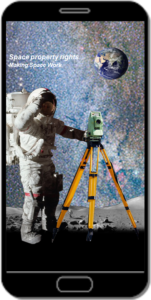 CityMoon : Getting back to the Moon

Earlier this summer, a friend and got to talking about space industry. Why industry and the authorities still had us stuck on Earth. It’s been 50 years. They played golf. And got us a bag of rocks. All the other promises were empty. And NASA keeps insisting that we ought to be making riskier long-duration trips to Mars vs. bootstrapping like entrepreneurs do. But got to thinking, concluding that the old Outer Space Treaty (UNOOSA, 1966) is the barrier to entry. The national space agencies really have little choice, because signatory states all agree that no one can own private property off-planet.

Well, who invests in that.

The strategy here? A new treaty to break the investment log-jam. That’s been the project of the last few months. I will periodically post and welcome guest commentary.  It takes all of us to make the world better. And all of us dialoguing to move our civilization forward.

The amazingly good CSS 3D Solar System coding at codepen.io is by@JulianGarnier. Click the picture to see the code in action! Use the controls at right to change display options.

When reading about IIT Madras graduate Naga Naresh Karutura, I do not see a “double amputee”. Instead, high potential to be an ISRO astronaut flight specialist candidate.

In micro-gravity, Parasuit°-enabled Amputean° and Paraplegian° Astronauts may have the competitive edge. Industries and cultures embracing the perspective shift gain competitive edge, too. ° I’ve coined these words, having noticed they somehow convey a sense of uplifting. Everyone needs an uplift, now and then.

Codepen.io image by Julian Gardner: http://davehuer.com/bcitfolio/innoprojects/inno-shieldship.html – The basis of this proposal of mine from 1993/4? NEO delta-V is a technically and profitably-usable resource.